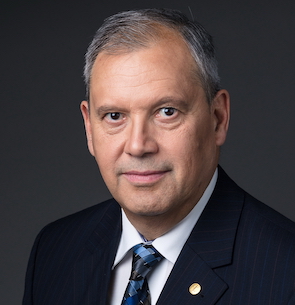 Dumitru-Dorin Prunariu works as an expert within the Romanian Association for Space Technology and Industry – ROMSPACE and as a member of the Board of the Romanian Space Agency.
In May 1981 Prunariu accomplished an 8 days space flight on board Soyuz-40 spacecraft and Saliut-6 space station.
Prunariu is one of the founding members of the Association of Space Explorers (ASE). From 2011 until 2014 Prunariu was the elected president of ASE International, and since 2014 for 6 years served as president of ASE Europe. Since 2005 he is also a member of the ASE Committee on Near Earth Objects (NEO).
Since 1998 until 2004 Prunariu was the President of the Romanian Space Agency. Starting with 2004, he was for almost two years the itinerary Ambassador Extraordinary and Plenipotentiary of Romania to the Russian Federation. Since 2011 Dumitru Prunariu is an Honorary Member of the Romanian Academy. Since 2010 until 2012 Prunariu served as the chairman of the United Nations Committee on the Peaceful Uses of Outer Space (UN COPUOS). Now he is a vice-chair of the UN COPUOS Working Group on “Space Agenda 2030”. In 2012 he was appointed as one of the 15 experts of the Group of Governmental Experts on outer space transparency and confidence-building measures (TCBM), established by the UN General Assembly Resolution 65/68. In 2018 was appointed as one of the 25 members of the Group of Governmental Experts on Further Practical Measures for the Prevention of an Arms Race in Outer Space, established by the UN General Assembly. Prunariu was also a member of the task force elaborating a report on Space Security for Europe in the framework of the European Institute for Security Studies (EUISS), issued in 2016. In 2018 Prunariu was appointed as a co-vice-chair of the Working Group on 2030 Space Agenda within the UN COPUOS.
Since 2014 until 2017 Prunariu used to be the vice-chair of the International Relations Committee of the European Space Agency (ESA), continuing to be the representative of Romania within this ESA committee.
For his work connected with Near Earth Objects and for the promotion of the Asteroid Day as an international day recognized by the UN General Assembly, in 2017 an asteroid was named with his name, the asteroid “10707 Prunariu”.
Prunariu is a co-author of several books regarding space technology and space flight and has presented/published numerous scientific papers. He earned a degree in aerospace engineering from the University POLITEHNICA of Bucharest and a Ph.D. in the field of space flight dynamics. Prunariu is an Honorary Citizen of several cities and Doctor Honoris Causa of several higher education institutions from Romania, Republic of Moldova and USA.
Prunariu is married to Crina Prunariu, retired diplomat from the Romanian Ministry of Foreign Affairs, have together two sons and three grandchildren.