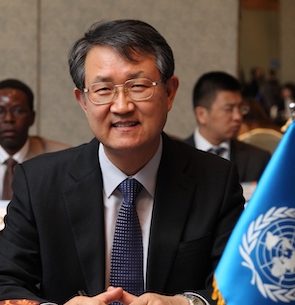 Mr. Kyoung-Soo Eom has been serving as Chief of UN Geospatial Information Section since 2005 in the United Nations. He has over 35 years of technical and management experience in the public and private sectors as well as military service.

He joined the United Nations Department of Peacekeeping Operations (DPKO) in January 1999, and he identified the missed opportunities in using geospatial information and GIS tools in order to meet the operational needs to support effective decision-making of UN peacekeeping operations. In early 2000, he prepared a project proposal to use GIS and Remote Sensing technologies to support UN peacekeeping operations at Headquarters and in the UN field missions with an aim to bring geospatial analysis capability to UN peacekeepers and support a common operational picture for decision makers, management, planners and subject matter experts.

In accordance with the Peace Agreement between Eritrea and Ethiopia, the UN Secretary-General designated Mr. Eom to serve as the Secretary of the Eritrea-Ethiopia Boundary Commission (EEBC) in 2005-2008. He was also appointed Acting Chief of Strategic Support Service in the Department of Field Support in 2012-2013.

Prior to his work with the United Nations, Mr. Eom worked for LG-CNS (System Integration Company) in Seoul, Korea as General Manager and Project Manager. He also served in the Korean Army as the Chief of Combined Terrain Analysis Team of Korea-USA Combined Force Command in Seoul and Chief Operations Officer of the Korean Contingent in the UN Operations in Somalia.